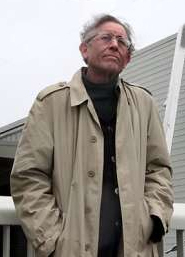 Artist Douglas Hollis was born in Ann Arbor, Michigan in 1948, and continued to live there throughout the years of his college education at the University of Michigan. From an early age, Hollis had a deep interest in Native American culture and he began exploring their history and culture.  At the age of twelve, Hollis began traveling in Oklahoma to live for periods of time with Native American families. He received a unique world-view from these people which has strongly influenced his life and art ever since.

In the early ‘70’s, Hollis began working with natural phenomena and searching for new ways to talk about landscape and the forces which are constantly affecting it. This search ultimately led him to his current work with wind- and water-activated sound structures, and to the specific, environmental dynamics of sites. The first Aeolian Harp was developed during a residency at the San Francisco Exploratorium in 1975-76, and this series of wind-activated, ‘sonic architecture’ works continued to evolve over several years. He continued to develop his work in sound structures and landscape, working on-site and establishing a rapport with the dynamics of the site and with the people who encounter these places.

Mr. Hollis continued this work and has earned a reputation  for developing sculptured works which people want to inhabit, and that would age well and increase in meaning as time flowed over them. He has created numerous major permanent commissions including “Sound Garden” in Seattle, Washington, “Tidal Park” in Port Townsend, Washington, and several park designs in Seattle, Washington, San Diego, California, and Tucson, Arizona. In the last decade, he has also completed several large-scale projects that explore and celebrate water.

Mr. Hollis has participated in many Public Art and Landscape Architecture conferences and forums, and have lectured widely to promote collaborative thinking. He has also taught studios, and seminars at Harvard University, the University of Virginia, the University of California at San Diego, LaJolla, and UC Berkeley, and has been a member of the Board of Directors of the San Francisco Exploratorium and the Headlands Center for the Arts.